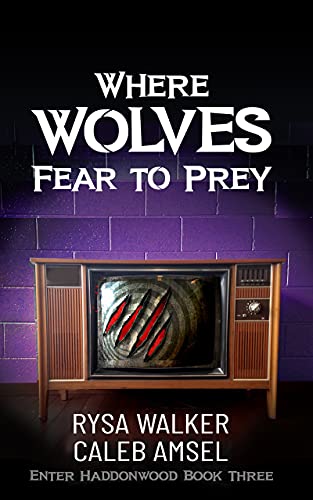 About the Illustrations in Where Wolves Fear to Prey

A quick caution before we dive in. If you haven't read the book yet, a few of these images veer a bit into spoiler territory, so you might want to finish reading first if that makes you crazy.

Those who have read the first two Haddonwood books may recall that the Haddonwood simulation has inexplicably created an AI who appears to be a bit different from the others. Dani Gray frequently snarks that she's not a real, live girl. There are some pretty impressive AI programs out here in the real world, as well, and while procrastinating, Rysa began playing around with Midjourney AI. Some of the results were stunning, and after some consideration, we decided to add them to the final book in the trilogy. (We're working on a illustrated second edition of the first two books and hope to have these available soon.)

Where Wolves Fear to Prey includes more than thirty illustrations created with Midjourney AI. Some are completely generated by computer, using only a text prompt and a bit of patience. Others required very minor editing, such as color correction or combining two prompts in Photoshop. A few of them are hybrid, combining the AI results with purchased stock images--basically, anything that needed arms. Appendages seem to be a challenge. Even the few in that latter category were fairly easy to edit, taking no more than twenty minutes or so to edit in Photoshop.

Since some readers may be curious as to which images are completely generated by Midjourney and which were tweaked by Rysa, we're including the images below, along with the changes made in Photoshop, and the prompt that was used to generate the base image. (One thing to note if you decide to try Midjourney out for yourself: the same prompt can generate thousands of different images, so if you type in the prompt given, you won't get the exact same image and might even get something wildly different.) When illustrated versions of the first two books are complete, we'll add those here as well.
Order Where Wolves Fear to Prey

Fire at the Revival

Combination of two images from Midjourney. The prompts used were "circus tent full of people on fire, realistic" and "tent revival with people on fire".

Boy in the Bushes

Entirely from Midjourney except for the logo on his shirt, which is from Deposit Photos. The same prompt was used for both. "small boy wearing a white t-shirt with red hair and electric blue eyes hiding in bushes, realistic, dramatic".

This one was included more for mood than accuracy. This doesn't look much like the Creeper from the Jeepers Creepers movies, but it also evoked the Void, which is an even bigger threat to their existence. This is entirely from Midjourney, combining two prompts and a minor edit. The first very simple prompt got everything but the school bus "jeepers creepers monster attacking." The second prompt was "schoolbus in a cornfield at night, spooky, realistic." The edit was taking out a third leg...as usual, editing mostly involved adding or removing appendages.

This is one of Zophiel's counterparts on the "angelic" Council of Seventy-Two. Entirely Midjourney, with a single prompt: "angry elderly native american woman wearing feathers, holding arms out, realistic, glowing red inside a dark room."

Entirely Midjourney with a single prompt, except for color correction on the eyes: "man with crow's head realistic dark fantasy."

Daisy in the Nexus

Entirely Midjourney with a single prompt, except for color correction and addition of the left hand. Prompt: "18-year-old girl with straight dark hair standing at the edge of the universe, realistic."

Werewolf Fight at the Police Station

Entirely Midjourney except for police car, minor color correction, and correction on the word POLICE on the building. Prompt: "werewolves fighting in front of a small town police station, night, realistic."

Bael, King of the Demons

Entirely Midjourney. Prompt: "demon with the face of a frog wearing a crown realistic."

The Council of the Infinite

The Council is only alluded to, never actually seen or described in the book. But this one was so quirky and surreal that we had to include it. So...now you know something that (hopefully) the characters will never see for themselves. Prompt: "the council of the infinite inside a crystal ball realistic."

The Grimshaw House in the Nexus

Dani Gray at the Cabin

Midjourney except for the arms and the Haddonwood Howlers logo, plus some minor color correction. Prompt: "an 18-year-old girl with dark blonde hair wearing a blue and gold cheerleader uniform, full body, in a dark forest, photo realistic."

Midjourney except for removing one eye and minor color correction. Prompt: "a pink raccoon slipper lying on the forest floor, dark, realistic"

Daisy in the Nexus Part Deux

Entirely Midjourney. Prompt: "18-year-old girl with straight dark hair and green eyes standing at the edge of the universe, realistic"

Chase in the Nexus

Entirely Midjourney except for some color correction and the addition of Chase's neon orange sneakers. Prompt: "ghost of a 12-year-old boy sitting in a corner inside a haunted house, electric blue, realistic"

Tucker in the Oculus Mirror

This one is very much a hybrid. After multiple tries, Rysa gave up on trying to get anything close to an accurate render of Tucker holding a gun. The mirror is generated by Midjourney, the rest was created with two stock images from Deposit Photos. Prompt: "ornately carved wooden mirror scary oculus"

Werewolves in the Theater

Midjourney except for the necklace of eyeballs. Prompt: "giant stork demon wearing a necklace made of human eyes realistic."

Midjourney except for corrections to face and trimming some extra long branches: "scary giant scarecrow, photorealistic."

Midjourney except for minor color correction on forehead: "twelve-year-old boy, realistic, with eyes that are electric blue and gold."

Aali and the Werewolves

Luke at the Werewolf Fight

This one was complicated, but it's entirely Midjourney prompts. Four prompts: "werewolf full body, wearing red underwear, realistic," "werewolf front view realistic," "a rock tied inside pink sparkly fabric," and "small town main street with movie theater photo realistic." Some minor color corrections on the last one and a few extra minutes to get rid of the snow.

Daisy in Midair Over Haddonwood

This one was all Midjourney. Didn't even do any color correction. Prompt: "angry angel glowing amber against a night sky."

Chase and the Snowglobe

Combined two Midjourney images with image of hands from Deposit Photos. Prompts: "teenage boy with dark hair and blue eyes holding a crystal ball" and "many angels and demons fighting inside a crystal ball realistic."

A Field of Flowers and Butterflies

This one is 100% Midjourney. Prompt: "field of flowers with butterflies."

Click here for details on illustrated versions of As the Crow Flies and When the Cat's Away.