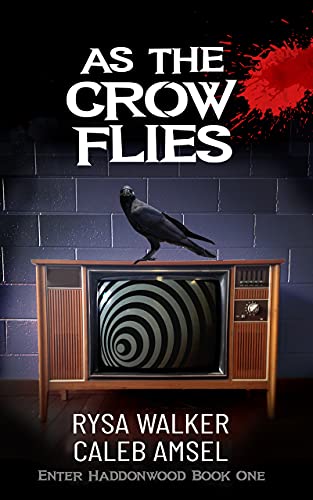 Illustrations from As the Crow Flies

Two prompts in Midjourney. One for the crow and one for the background. I did some correction on the wings of the crow.

The Girl at Grimshaw

Two Midjourney prompts. One for the main picture and one for the face.

Completely Midjourney, single prompt. I did some minor color correction and straigtened the arms on the cross.

Tucker at the Pinewood

Four Midjourney images combined. One for the motel and Tucker, one for the car, one for Grimshaw, and one for the sign. Color correction in Photoshop...and I had to remove Tucker from the roof and put him on the ground. No clue why he was on the roof!

Dani and the Kia

Two Midjourney images combined: one for the car and one for Dani. For the second one, I used an image prompt from the picture of Dani in the woods in Wolves and kept submitting until I got a version in a sweater that was fairly close to the original. Some color correction and blending.

Entirely Midjourney with a single prompt, except for cookies. Couldn't get it to render it with ginger snaps, so I added them in from a stock photo.

Entirely Midjourney, single prompt. I straightened the streamers at the bottom, but that's it.

Barb Starrett and the Crow

Two Midjourney prompts: one for the librarian and one for the crow. I also added a stock photo to repair parts of the wings.

Two Midjourney prompts: one for the guy in the shower and one for the background. I created the clawed hand in Photoshop and made a few minor corrections.

A single Midjourney prompt. I added the body from a stock image and painted in the reflectors.

This combined three prompts (two for the theater and one for the ant) and I had to quite a bit of tweaking in Photoshop. I think this was even a bit too bizarre (or maybe too bizarrely specific?) for Midjourney, which usually does an excellent job with the surreal.

Don't Let it Go Out

Two prompts, but the second one was only because I needed to standardize MB's face a bit across volumes. I did a second prompt using the image from When the Cat's Away and combined the new face with the first image from Midjourney.

Midjourney with a single prompt, except for the silhouetted dancers, which are from a stock photo.

Two Midjourney prompts. One was the background and one was for Ralph. I had to fix his clothes quite a bit in Photoshop. No way this guy would wear pastels.

Midjourney, single prompt, except for some color correction and a bit of dental work.

This one took many, many attempts, and I nearly gave up. But Caleb really wanted these ladies in the book, so I kept trying. I only got something useable after shifting to a beta mode that's more photorealistic. Pompoms confuse the AI. So do roller skates. Early iterations had feet coming out of ears. This one was a single prompt aside from the knives and some additions to the faces, which were too blurry to see in the original. I also had to remove a stray pompom.

Two Midjourney prompts to get the monkey and the base. I had to paint on the hands and the pants to make it look like the creepy one my grandfather had when I was a kid, and I did some color enhancement on the eyes. The eyes on the one I remember only glowed like this in my nightmares.

Two combined images from Midjourney, plus some color correction.

Completely Midjourney. And I think Flaming Crows will be my new garage band name.

Daisy and the Crows

Two Midjourney images -- the background and the girl. The second was an image prompt using previous versions of Daisy. This was more realistic than the other pictures of her, but it had a Judy Garland in the Wizard of Oz vibe that I liked.

Chase in the Nexus

Entirely Midjourney, except for the writing and the hands. I used an image prompt to the picture of Tucker from Wolves and while this doesn't look quite as much like him as I'd hoped, this guy was definitely the sexiest of the bunch and so here he is. You're welcome, Daisy.